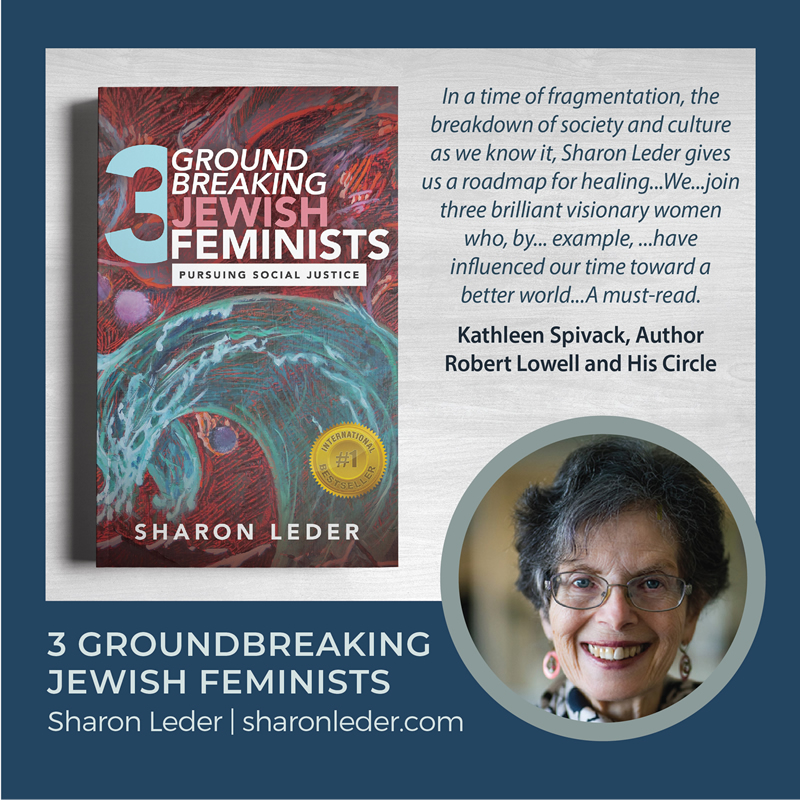 This book is about Jewish identity, but not religious observance. It is not about the ritualistic aspects of the Jewish religion, like keeping kosher or lighting candles on the eve before Sabbath. It is about Judaism as a religion of social justice. I am grateful to Ruth W. Messinger, who introduced me to the term social justice Judaism when I interviewed her in 2016 at the Utopia Diner in Manhattan. It was a concept Messinger learned from Rabbi Abraham Joshua Heschel, who taught at Jewish Theological Seminary where Messinger’s mother worked as public relations director.

Judaism’s social justice message is what captured me as a teenager and young adult growing up in the midst of the Civil Rights Movement, the Anti-Vietnam War Movement, and the second wave Women’s Movement. These movements jolted me into the awareness that many activists like myself came from Jewish backgrounds but did not openly identify themselves as Jewish. The realization that we had an invisible Jewish identity in common thrust many of us into deeper bonding in study groups to explore the Jewish roots of the ethical value systems by which we had been raised and with which we were now engaging as feminist activists.

Like myself, the three Jewish women in my study—Gerda Lerner, Susana Wald, and Ruth W. Messinger—resonated with two fundamental social justice messages in the Jewish tradition. The first is that the stranger (ger in Hebrew), the one who is different, has much to contribute and should not be vilified. The second is that as Jews we are responsible for creating a better world where strangers are not treated as “others.” The contributions of these three universalist Jewish feminists need to be recognized for having changed the face of the fields in which they practiced.

Their respective fields are women’s history, feminist Surrealist art, and international relations. Their lives and works as Jewish activists raise the question: Does Jewish identity call upon one to act with empathy toward others even at times when great numbers of fellow Jews feel the need to bond with one another solely as Jews?

The shifts that have occurred in the public identities of these three Jewish women offer hope that when conditions in the world cry out for global human bonding, there will be leaders guided by universal values whose voices will not be muted. Will we hear them? Is the time now?

At HIAS, the Jewish community’s global refugee agency, we describe the evolution of our mission as going from helping refugees because they were Jewish to helping refugees because we are Jewish. In Three Groundbreaking Jewish Feminists: Pursuing Social Justice, Dr. Sharon Leder takes us into the lives of three inspiring women, all leaders in human rights and social justice, and explores how their being Jewish influenced their own journeys for justice. This book should be reading for anyone – male or female, Jewish or gentile – interested in making a difference while on this planet and in making that difference with the empathy.

Marjorie Agosín, Professor of Spanish, Wellesley College. Author A Cross and A Star: Memoir of A Jewish Girl in Chile, and Always From Somewhere Else: A Memoir of My Chilean Jewish Father.

A profound meditation on the meaning of Judaism, social justice, and identity politics in the twentieth century, through the extraordinary lives of three Jewish women activists-- Gerda Lerner, Susana Wald, and Ruth W. Messinger. Through their passionate, courageous, and creative journeys defined by the horrors of War World II and the arrival of Hitler to power, the reader is invited to explore the vicissitudes of history. This is a most exceptional and original book on the power of the human spirit to resist adversity. A memorable read impossible to put down.

In a time of fragmentation, the breakdown of society and culture as we know it, Sharon Leder gives us a roadmap for healing. Three Groundbreaking Jewish Feminists gives us courage and hope that we can join three brilliant visionary women who, by their example and work, have influenced our time toward a better world. By choosing to write about women who devoted their lives to causes larger than themselves, Dr. Leder documents their identity struggles, their relation to Judaism, their personal suffering, their growth in understanding, and their unwavering belief in and contribution to social justice. It is a must-read.

Robert Melson, Professor Emeritus Political Science, Purdue University. Author Revolution and Genocide: On the Origins of the Armenian Genocide and the Holocaust, and a memoir, False Papers: Deception and Survival in the Holocaust.

Can one be committed to Jewish particularism—concerned with Jewish well-being and survival—as well as to universalist values of justice and equality for all peoples? In this fascinating study of three exemplary Jewish feminists, two of whom are Holocaust survivors, Sharon Leder explores how each woman wrestles with this question. Each one draws on her particular experience and professional field‒history, art, and international relations‒to arrive at a commitment to humanitarian service.

Sharon Leder powerfully and insightfully tells the stories of three very different Jewish women—scholar Gerda Lerner, artist Susana Wald, and activist Ruth Messinger—and, with scholarly depth and illuminating anecdotes, demonstrates how each was inspired by her Jewish identity to adopt a universalistic vision and to make the world better for others. Leder demonstrates that—as per Ruth Messinger’s favorite classical Jewish quotation—these three strong Jewish women knew it was not incumbent upon them to complete the work of healing the world, but their Jewish backgrounds impelled them to do what they could. Leder, whose own personal story also fits this pattern, helps us to be similarly inspired.

Three Groundbreaking Jewish Feminists Pursuing Social Justice offers a well-researched analysis of the complementary yet sometimes tension-inducing interactions between Judaism, Jewishness, and feminism. Throughout this honest and self-reflective account, Leder interlaces her thoughts about literature, art history, and religion and provides a vigorous portrayal of the effects of feminism on the spiritual and secular lives of three Jewish women. Indeed, the strongest feature of the book is its refreshing new way of exploring how particular peoples’ experiences may be universalized for a larger conversation about social justice, Judaism, and feminism in the women’s studies community.

Sharon Leder’s book is a welcome contribution to the movement of Jewish spiritual renewal. As a Rabbinic Chaplain I often hear Jewish people say that they are not sure about the existence of God, but they believe in good deeds and kindness as the way to heal the world. The lives of Gerda Lerner, Susana Wald, and Ruth W. Messinger demonstrate universal values as pathways to peace, values that transcend boundaries of color, class, gender, sexual identity, and nation. This book is a valuable and fascinating read for people of all religions and no religion. It leaves me grateful for the lives of these women and the ways they changed our world.

Sharon Leder has given us a significant work, long sorely needed. In 3 Groundbreaking Jewish Feminists: Pursuing Social Justice she traces the rich and complex lives of three ordinary/extraordinary Jewish women to demonstrate the nuance, precarity, and strength of Jewish lives and possibilities. With a feminist focus navigating the thorny relationship between universals and particulars, we learn about each woman and a wealth of Jewish history, struggle, and potential.

Dr. Sharon Leder in this book has given us a steadfast, loving testimony about three feminist Jewish women working for justice for all God’s children, no matter what! This witness is rooted in the particularity of Judaism made manifest in seeking to stand with the oppressed, the poor, and the marginalized. The repair of the world. It brings to my mind the words of ‘Mother’ Pollard, an elderly black woman who after participating in the Montgomery bus boycott for many weeks said, “My feets is tired but my soul is rested.”

Three Groundbreaking Jewish Feminists: Pursuing Social Justice shows two sides of humanity, one of persistent infliction of pain and damage to human life throughout history and the other of resilience on the part of survivors who fight back for justice and peace. Lerner’s and Wald’s narratives exemplify the suffering of millions of Jews under the Nazi regimes which swept Europe during War II as well as the lives of those dedicated to upholding ethical, moral principles of Judaism to help other people. Messinger, from pluralistic, multi-cultural New York City, advanced the plight of the poor and minorities of different colors and faiths being guided by her conviction that social justice and equality are universal norms among all religions. Dr. Leder’s book articulates issues of faith and secularism in the contemporary world and makes a valuable contribution to understanding common bonds among different religions.

This notable book introduces us to three diverse and impressive women, grounded in their Jewish identity, whose universal ideals led them to intersect with political realities, not as victims but empowered persons. Sharon Leder has given us an important work, meticulously researched, clear, concise and beautifully written. As a retired Methodist minister of the United Methodist Church, I am indebted to the author for expanding my understanding and appreciation of these remarkable women and the social justice tradition in Judaism they represent.

Dr. Sharon Leder has given us insight into three gifted Jewish women who, through their own Jewish journeys, lead the reader on differing paths to ‘Tikkun Olam’ (Repair of the World). Dr. Leder makes us understand that although the roots of our Judaism are diverse, it is possible that we are all intertwined with the history and commandments of our Torah. Powerful and insightful! I would recommend this book to anyone who is interested in the question of what makes a strong woman a strong Jewish woman. 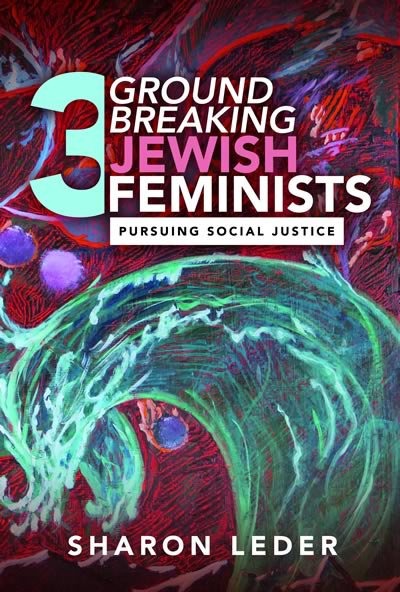 "Who Am I? The Perplexing Nature of Jewish Feminist Identity"
Tikkun Magazine

Interview on "The Edge of Every Day" with Sandra Bargman, Podcast Monday, March 21 LISTEN on Talk Radio NYC. Archive of Programs

Please become a member in order to register: www.92y.org